Latest News
Home /A Day Trip from Da Nang to HOI AN | Is it totally worth it?
Spread the love

One of the many places we decided to visit was Danang (Central Vietnam) because it lies between Hue and Hoi An. During our stay at the Danang Golden Bay Hotel, we decided to visit the ancient town of Hoi An. Considered as a UNESCO Heritage Site, this ancient town is one of the best examples of a well-preserved South East Asian trading port dating from the 15th to the 19th century.

To this day, thousands of tourists flock to Hoi An to walk around and immerse themselves in the rich history of this place – and that’s what we came to see. 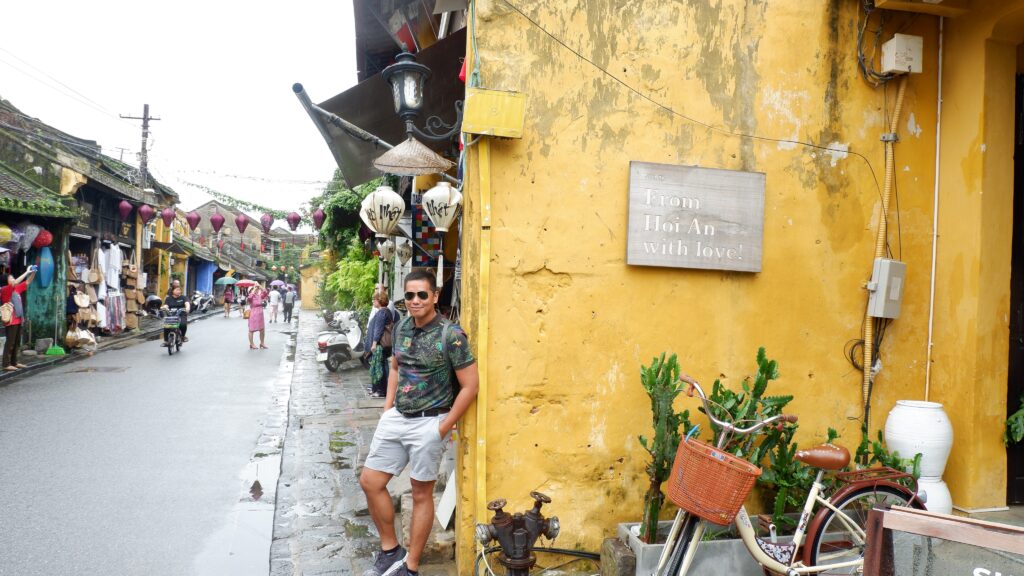 How to get to Hoi An?

After breakfast at the hotel, we asked the concierge to hire a taxi that would take us to Hoi An. They booked us a Vinasun Taxi. The taxi arrived and off we went for an hour or two drive to Hoi An. It was quick and there was very littletraffic en route. The best thing of all, most of the taxis accept credit card. 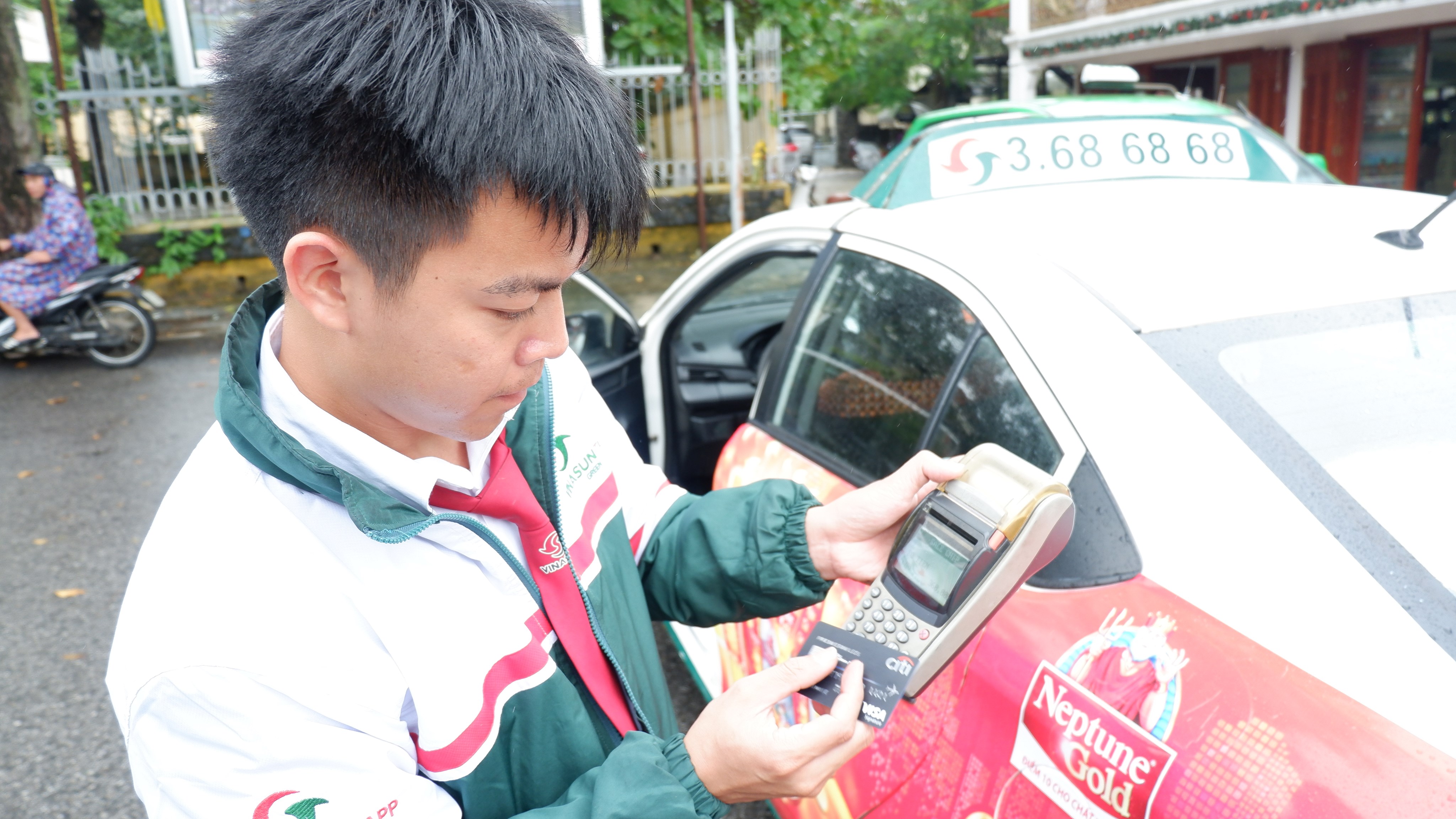 When we arrived in Hoi An, it was gloomy and there was a slight drizzle. Luckily, we brought an umbrella and we started our walk around this beautiful town. We didn’t have any map or a fixed itinerary. We just followed the other tourists and just wandered around. 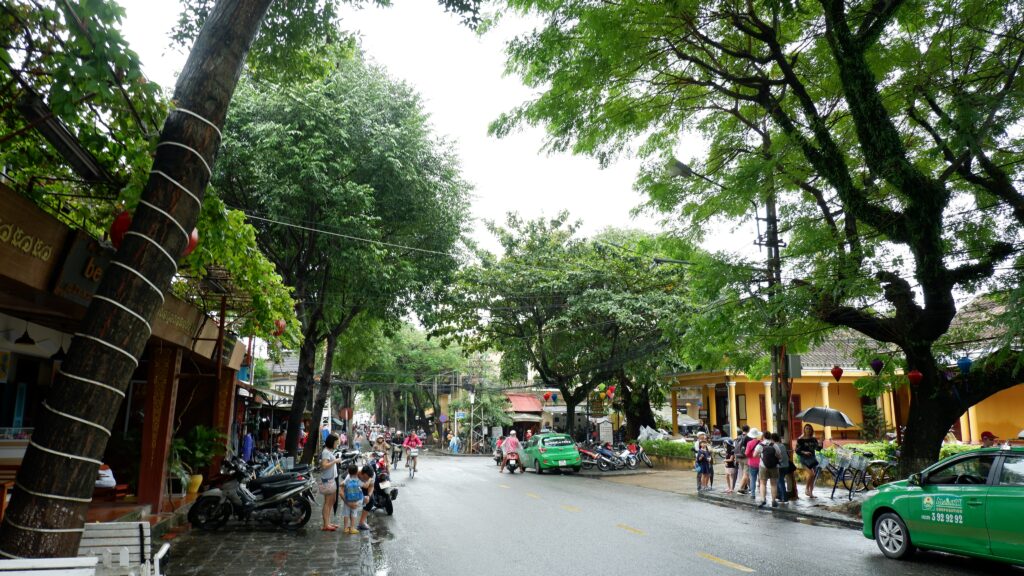 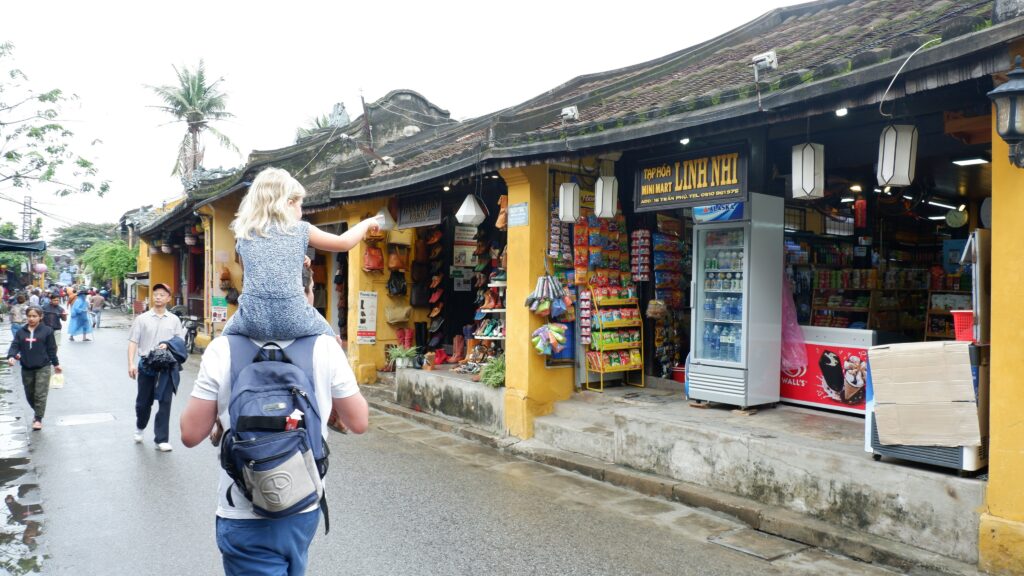 The little town was undeniably beautiful. The place is so vibrant with different colours, beautifully structured ancient houses, and silk lamps which add more character to the place.You can check on some of the houses inside to see more but there is a certain fee for that. You can also check on some of the shops which sell different souvenirs. 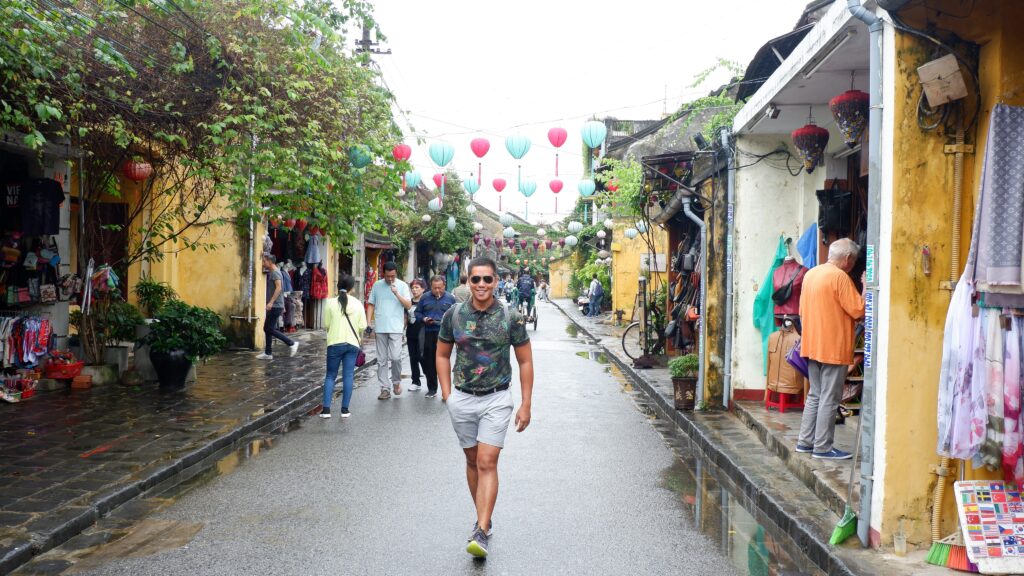 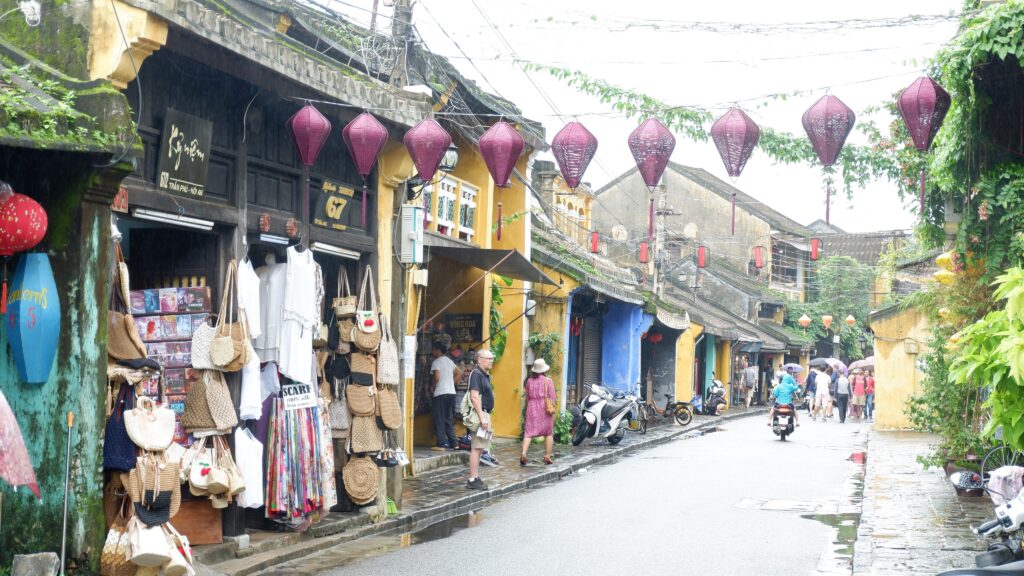 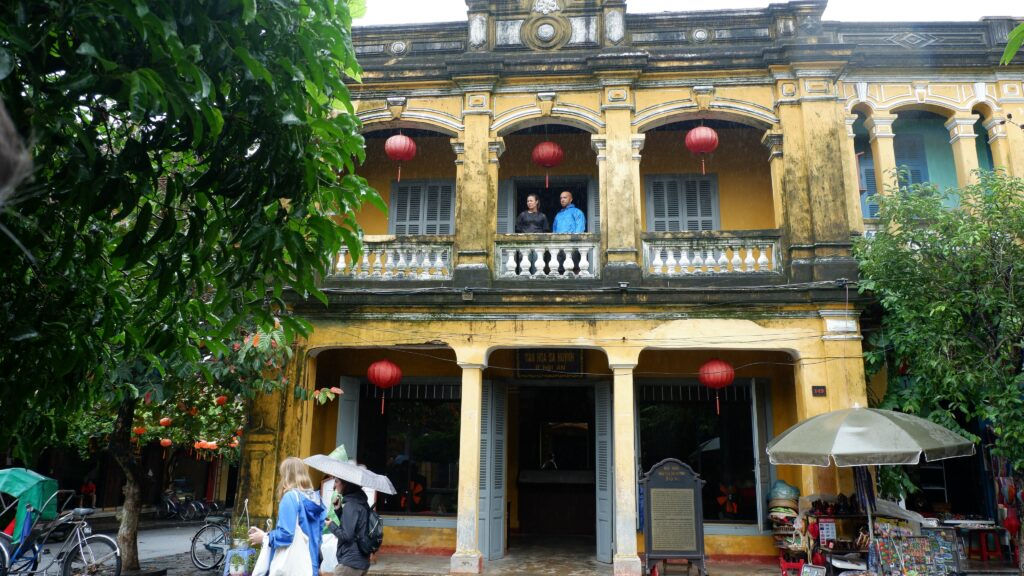 We walked further and saw what is considered the most iconic structure called the Japanese Covered Bridge. We tried to walk inside, but there is an entrance fee. So we thought of going the other route.Further along the river, you will find another bridge that you can walk across.  There are restaurants and coffee shops around and in between, you will find small alleys where you could cut through and see more on the other side of the bridge. 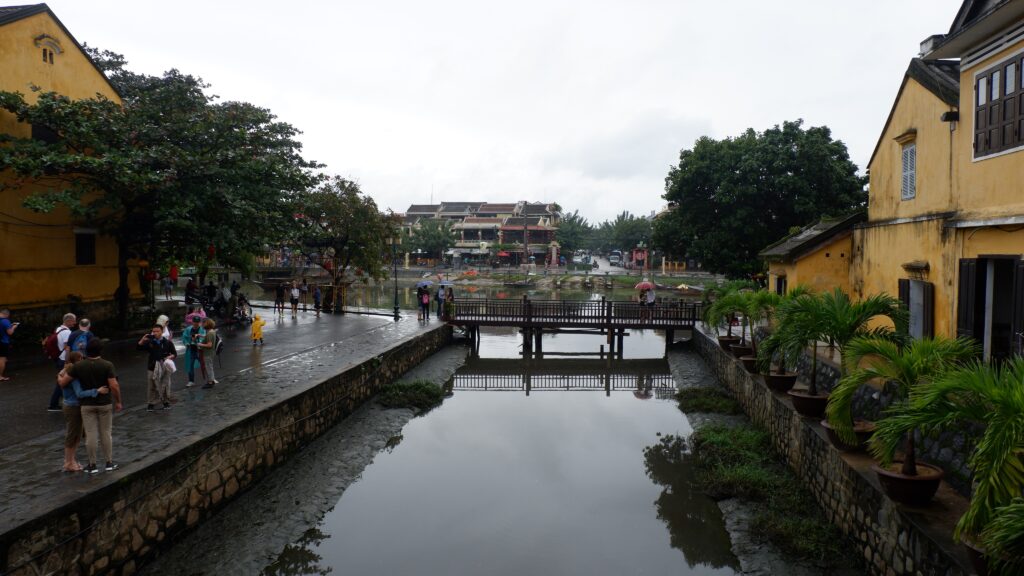 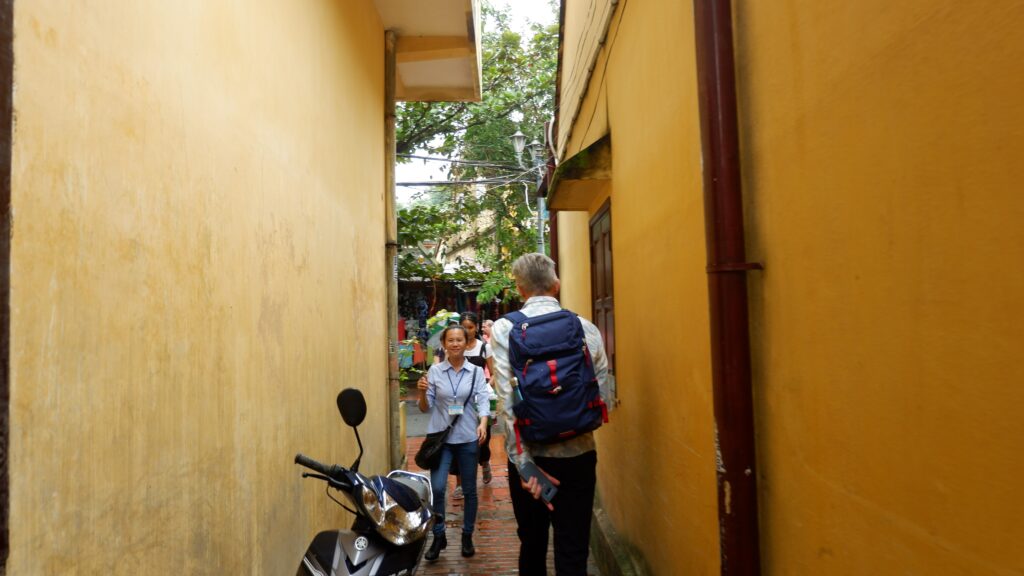 On the other side, you will find more stores. We really wanted to walk further but it was raining and all we really wanted was to see what was inside this historic bridge. 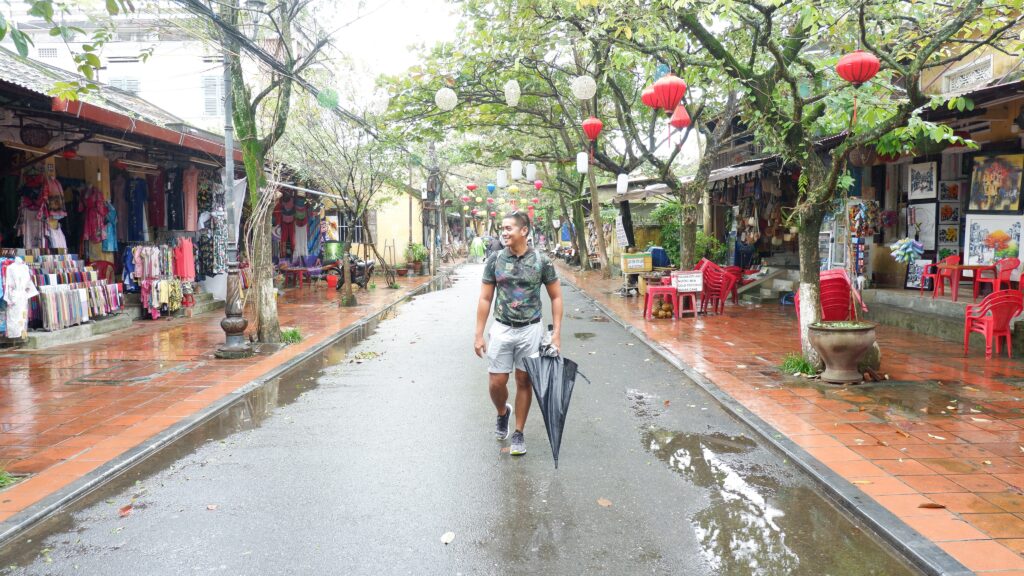 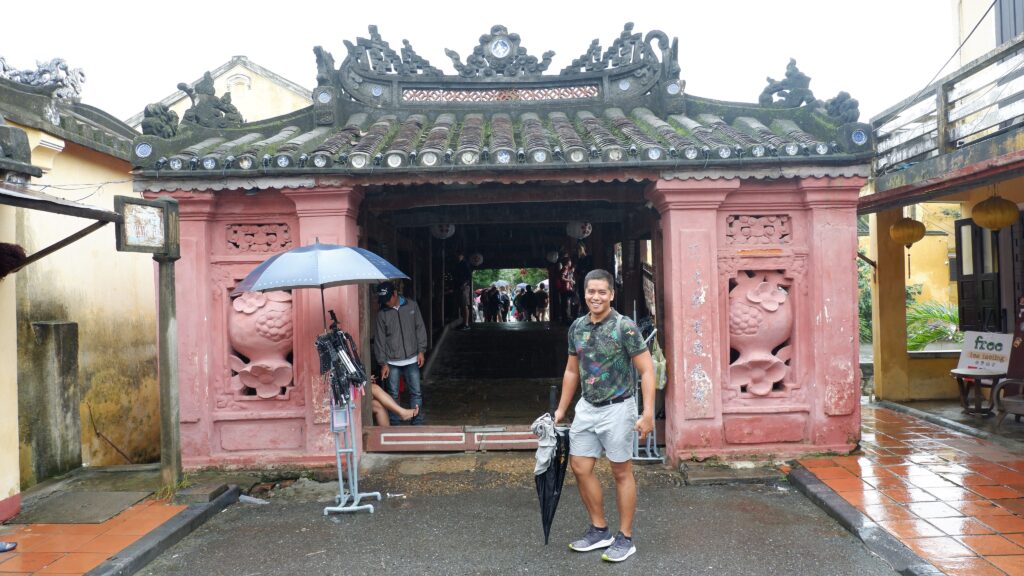 It was a short bridge, there was a temple where devotees could pray. There are small windows where you could sneak a peak at the river. It was really amazing and walking through was like you are already part of the history. 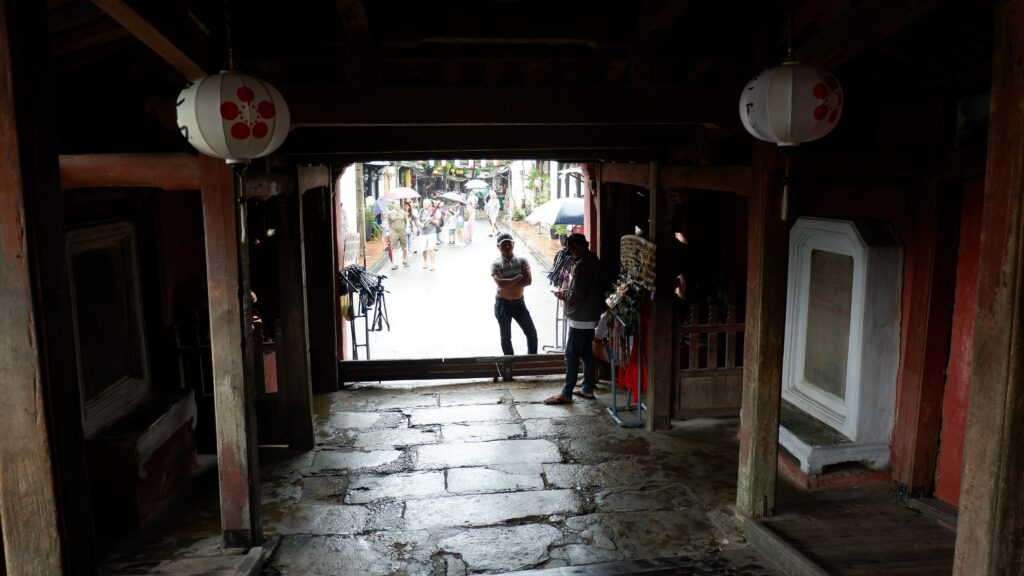 Stop for a local coffee at Hoi An Roastery

We walked along the streets of Hoi An, as I mentioned it was drizzling so we decided to stop for a bit and found this local coffee shop called Hoi An Roastery.  We liked how it was so open and you could see everything that was going around outside. It was so relaxing to just enjoy a nice Vietnmese coffee while relaxing and watch people go by. 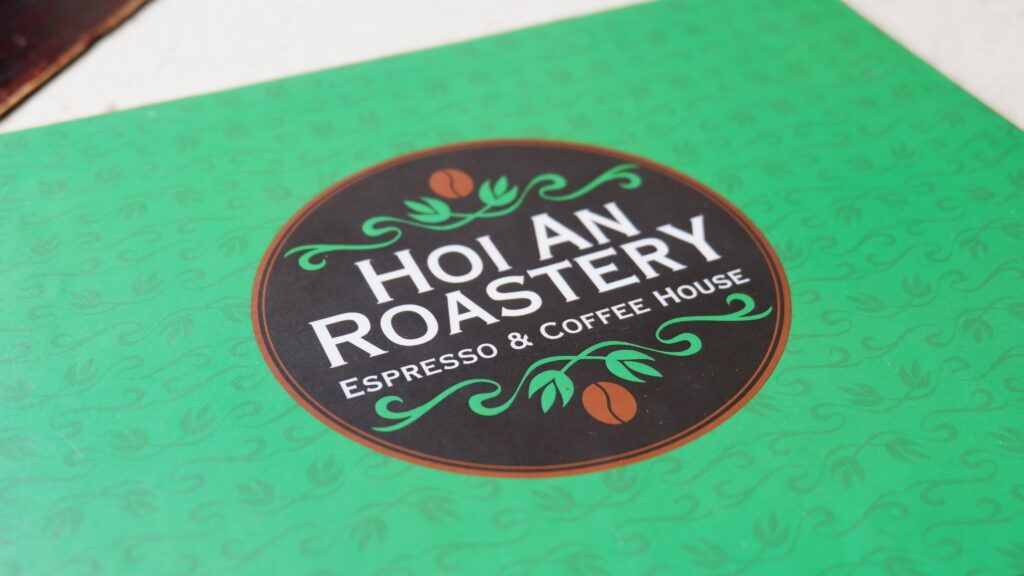 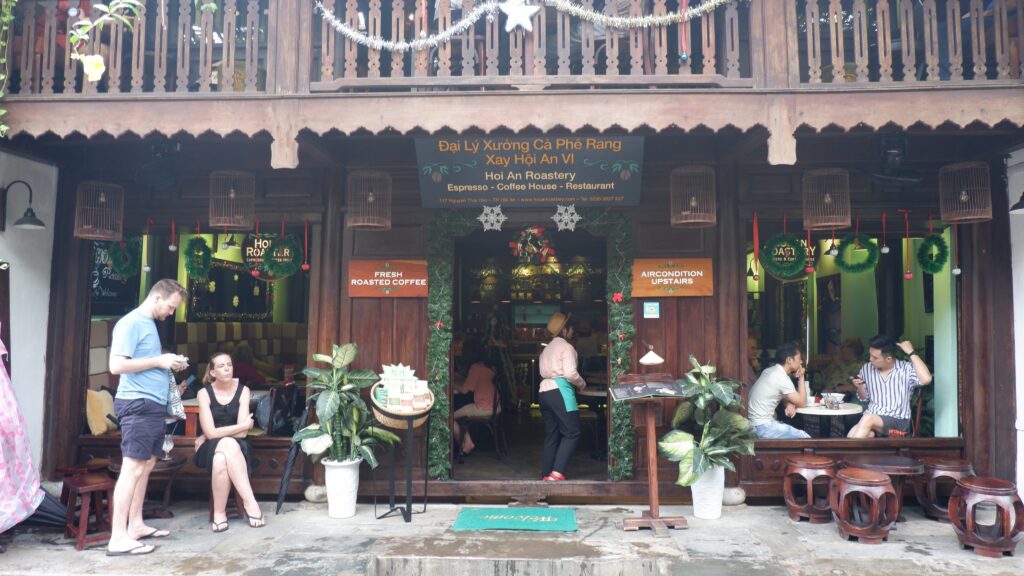 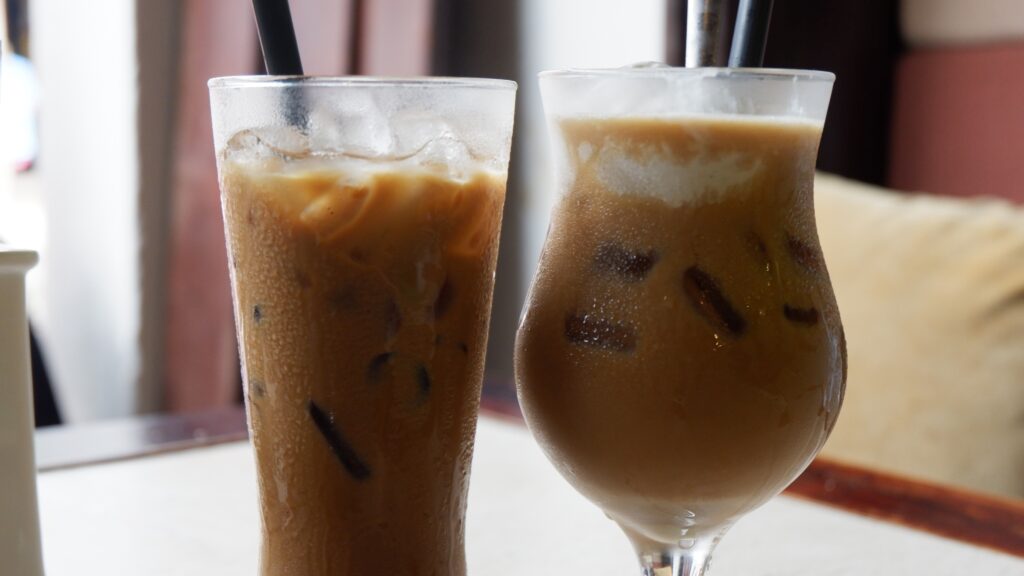 There is no doubt that Hoi An is a beautiful and a very picturesque town to be in. Another famous attraction here are the colorful silk lanterns that are basically found every where in this ancient town. I could imagine how beautiful this place is at night specially when you have all the lamps lit up. They also have these lamps available for sale in most of the souvenir shops. 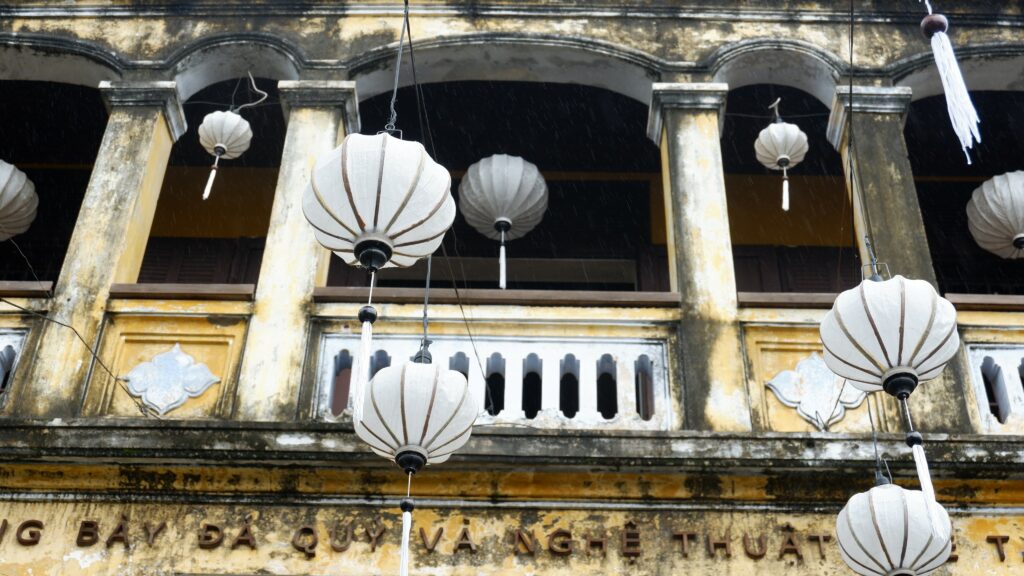 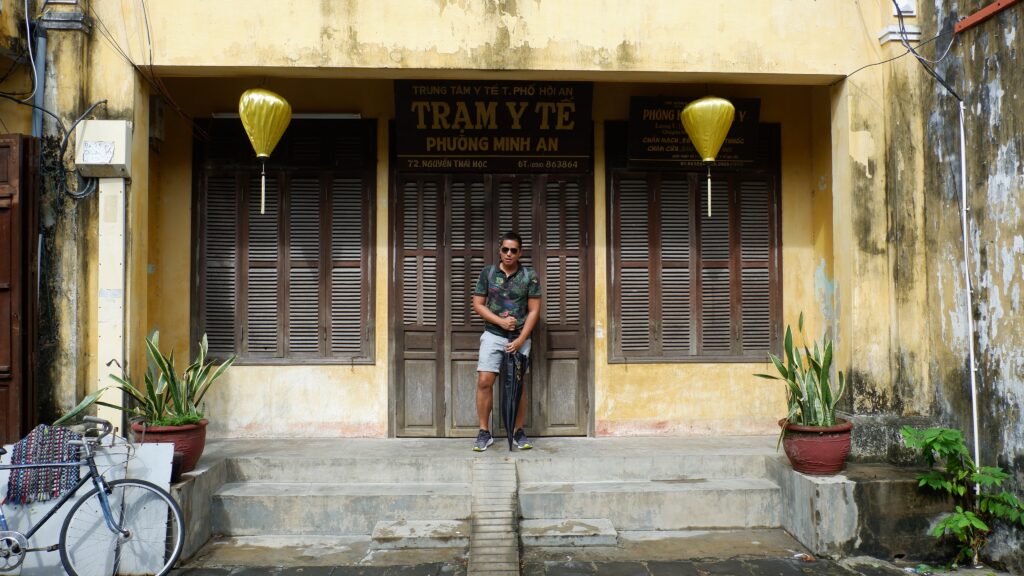 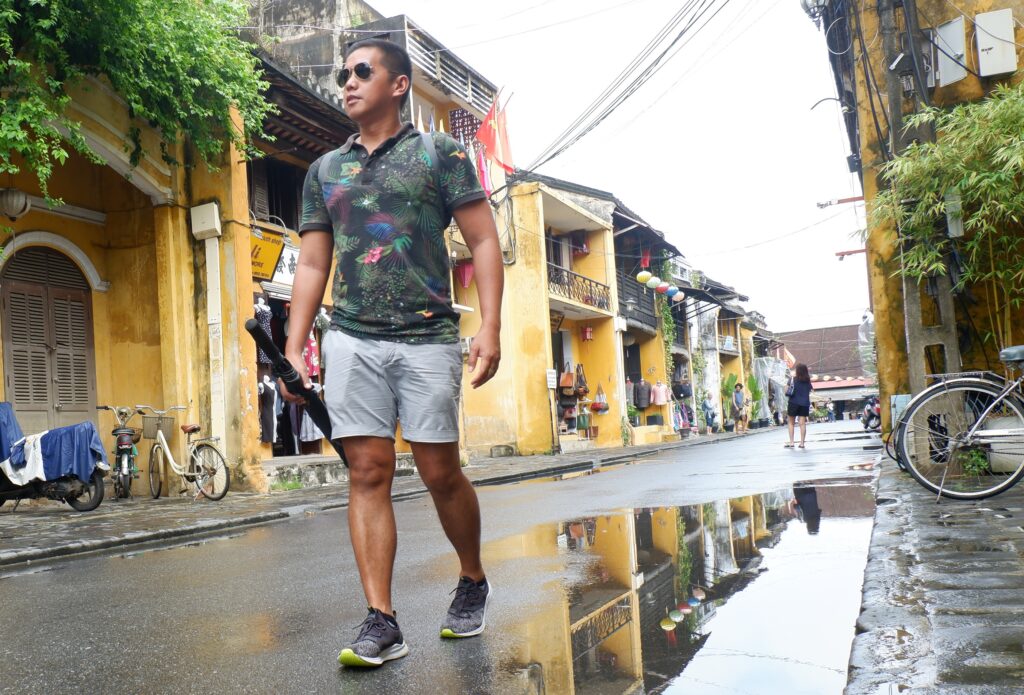 Try some local Vietnamese Food in Hoi An

After the tour, you will end up at this place called CHO HOI AN. This is a great place to try some authentic Vietnamese food. At first I thought it was a market but when we walked in, it was a big food hall. I find the place very clean and the food you will find looks very tempting. It’s really worth spending a few minutes and just enjoy the food before heading back to Da Nang or wherever. 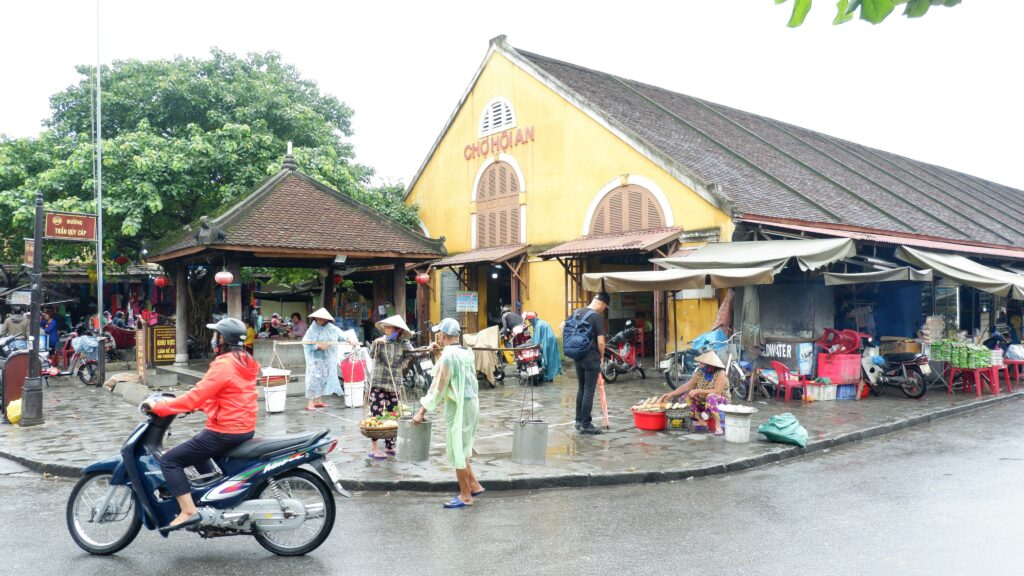 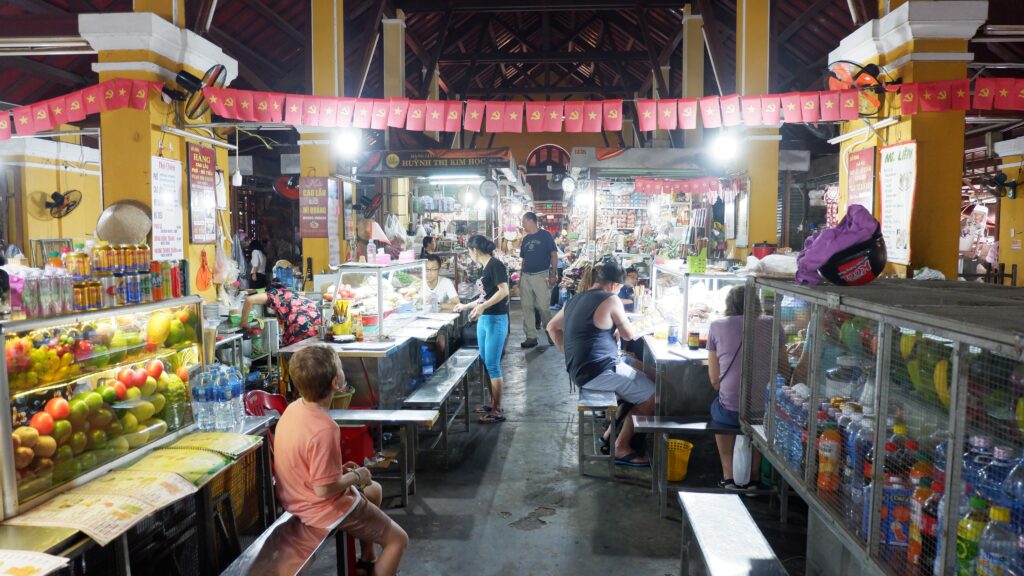 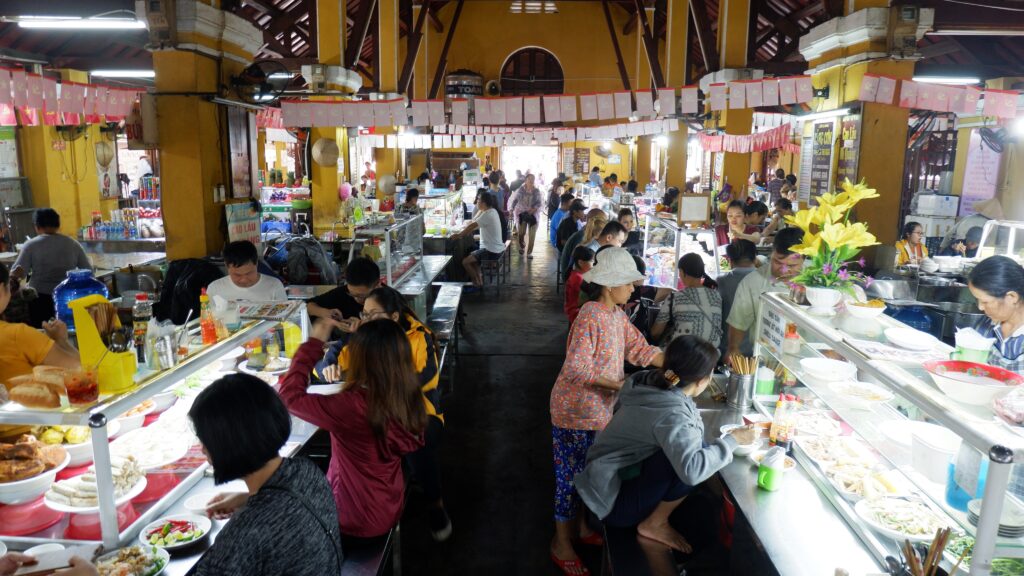 After a few hours in Hoi An, we then grabbed a taxi back to Da Nang, but we saw another beautiful place too difficult not to visit called the Marble Mountain. Which I will be writing about soon.So when visiting Vietnam, do not forget to include the central area, and I am telling you, you will not be dissapointed.

IT’S TOTALLY WORTH IT!

Here is a video of Hoi An made by Benn TK

TAGS: ancient town of hoi anhoi anhoi an roasteryhow to get to hoi an from danangthings to do in hoi an
Please follow and like us: