Latest News
Home /EL NIDO Palawan Island Hopping (Tour A)
Spread the love
Right after my trip to Puerto Princesa some weeks ago, I stayed at Blue Palawan and made some side trips to Nagtabon Beach. I received another invitation again from a friend of mine, Ver Real, to accompany him, and this time to explore EL NIDO. 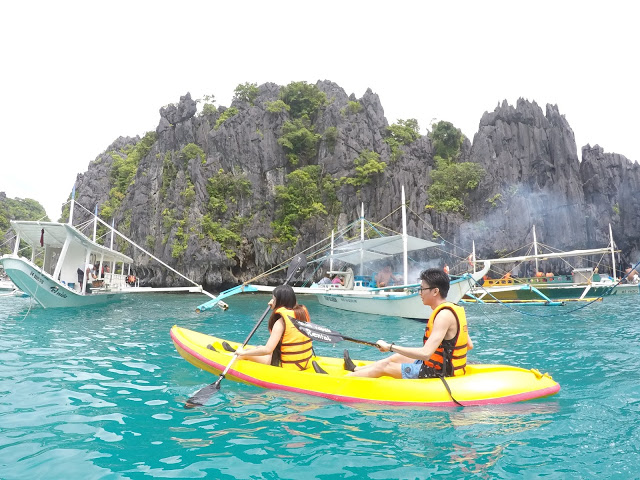 I suddenly got very excited, and it was difficult to say no to this opportunity! So we packed our bags and flew to Puerto Princesa en route to El Nido. 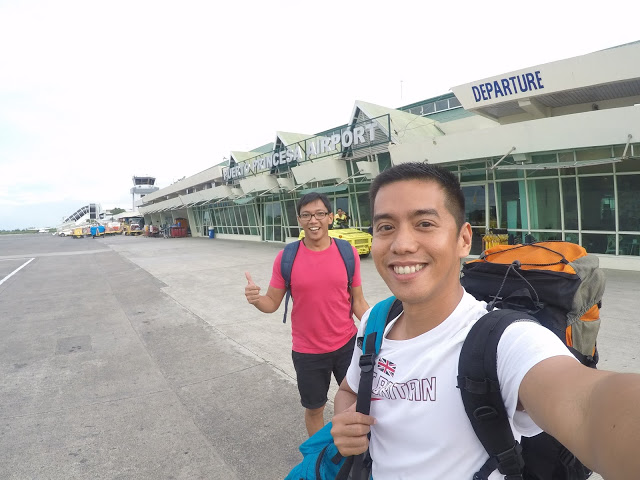 There are four options to explore El Nido. Each tour will take you to different beautiful islands and lagoons scattered around El Nido, Palawan. The tours are entitled Tour A, B, C, or D, and most rates average from 1000 – 1500 per person. But if you are a good haggler, I am pretty sure that you can get it at an even lower price.
I would also like to inform everyone that this trip was arranged by ATTRACION DE TOURISMO TRAVEL AND TOURS, a travel agency based in Puerto Princesa, Palawan.
Due to some delayed flights in Manila, we arrived in Puerto Princesa at around 5:00 pm and started our 5-hour journey to El Nido. Upon arrival, the van was already waiting for us to take us to El Nido. However, If you don’t have an arranged transportation, you could also easily take a bus from Puerto Princesa to El Nido.
At 11:00 pm, we finally arrived at El Nido and checked in at La Casa Teresa. As much as we would love to go around and explore the town, it was too late already, so we decided to go to bed after a few drinks! 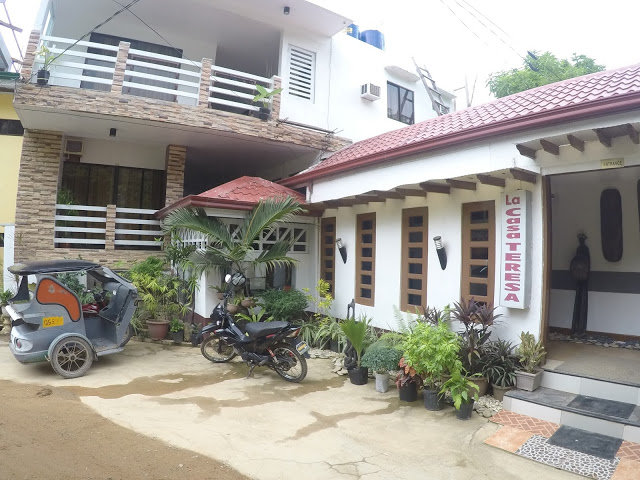 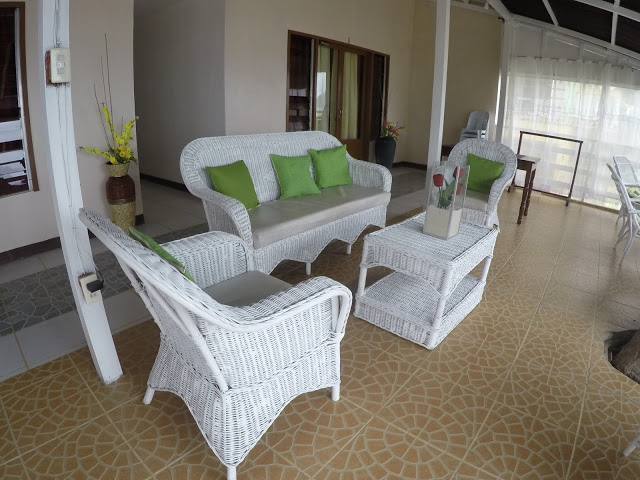 The morning had arrived, and as we opened the door, I couldn’t believe what we are looking at. I thought I was like in a different dimension or world seeing these huge karst islands on the horizon. 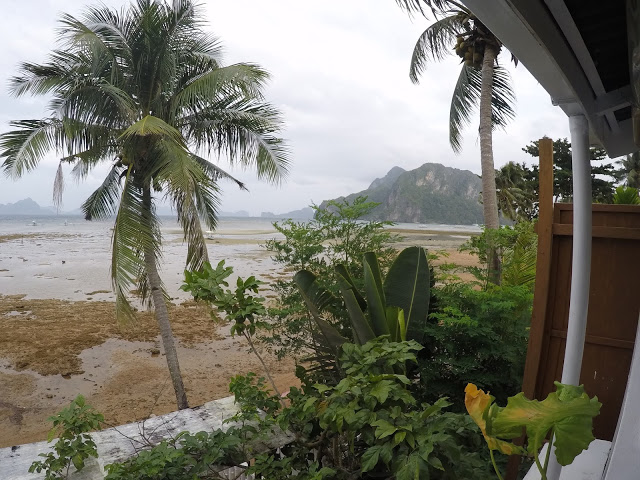 Right after breakfast, we immediately started our tour. For my first adventure here in El Nido, we decided we wanted to do TOUR A. This tour would take us to at least 5 to 6 different islands, which I will mention a little later.
However, the weather was not on our side, though. This was the time where a typhoon was hammering the north of the Philippines. Luckily it was just overcast, and the coast guard didn’t cancel the tours.
So here are the islands we explored under TOUR A in El Nido! 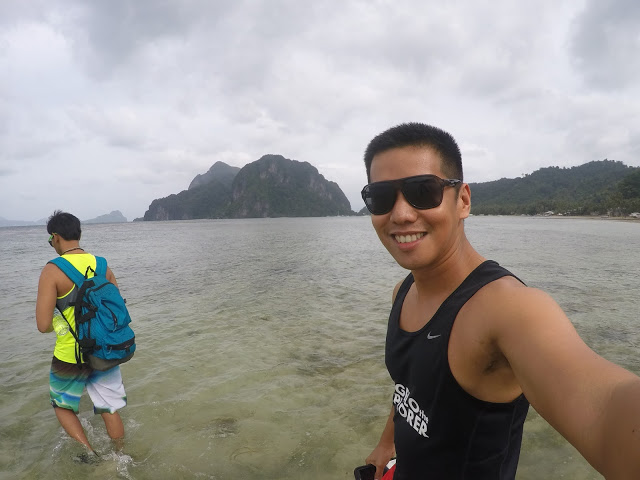 Our boatman decided to make this the first stop as this island could get busy later in the day. He was actually correct! We arrived with not many guests on the beach. The karst mountain in the background was so beautiful, the sand was so fine, and the water was warm. Perfect for swimming and sunbathing! 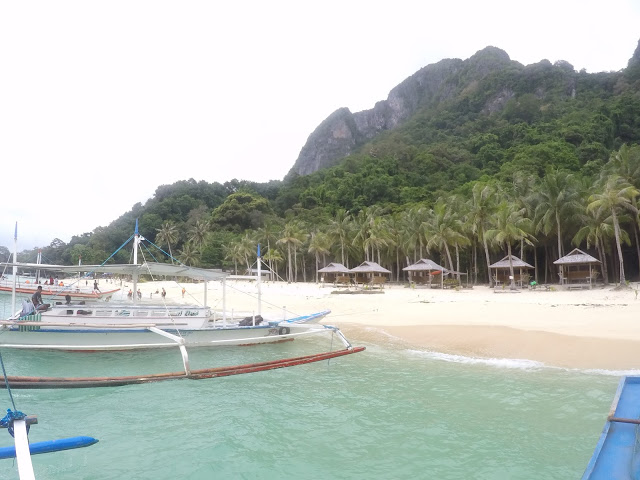 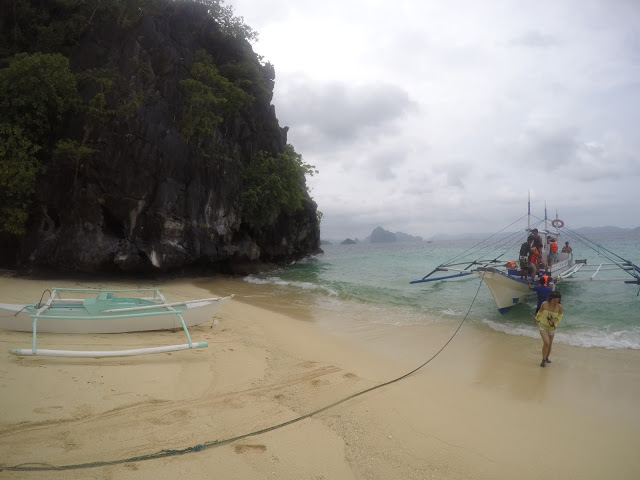 Because this place is so famous among the tourists, you will find a snack bar and some tables and chairs for those who want to relax for a bit. At the far end of the beach, you will find a very posh Vellago Resort Hotel. I wish I could stay there one day! 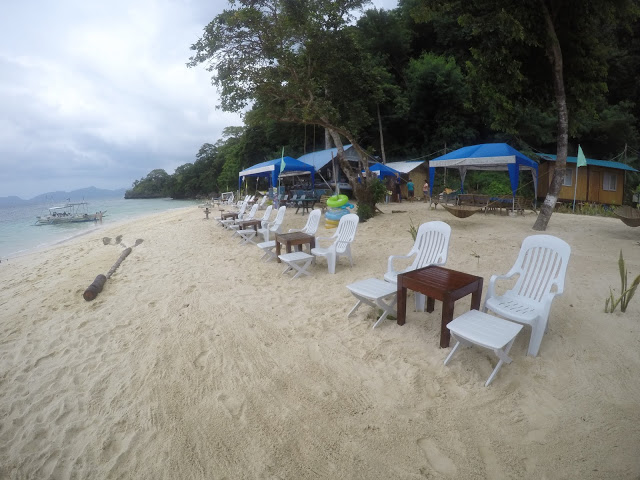 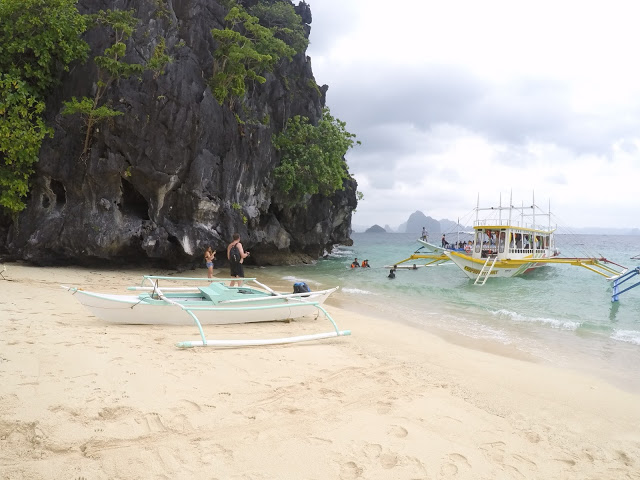 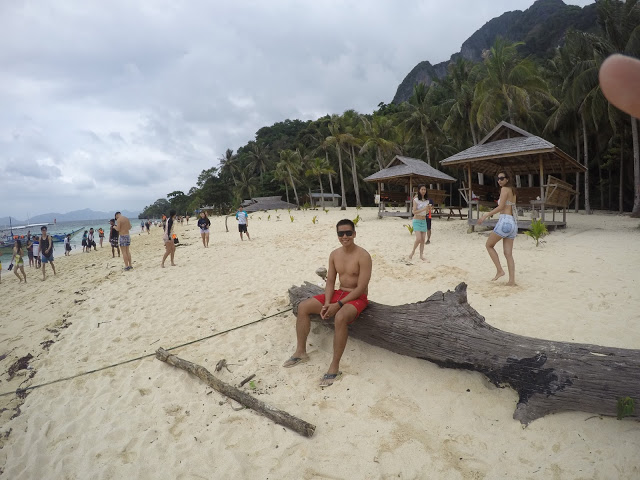 For our 2nd stop, we went to Small Lagoon. Boats parked, and I couldn’t wait to see what this Small Lagoon was like. Since the lagoon entrance was a bit far, kayaks are available for rent at around Php 300 pesos for those who cannot swim. But in my case, I underestimated the distance and decided to swim from the boat all the way to the lagoon. I shouldn’t have done that! It was tiring!
This tiny passage entering the Small Lagoon. Watch your head! 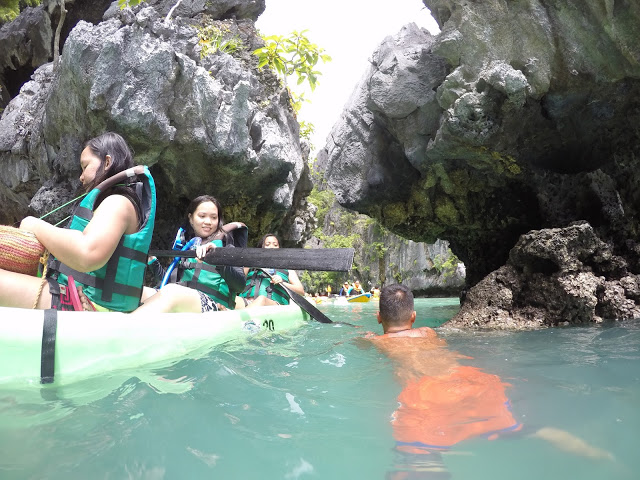 As we entered the lagoon, I was again mesmerized by the beauty of the place. And again, all I was saying was wow! I could imagine how clear this water would be on a sunny day or even summer. But since it’s been raining, the water was a bit murky. But it was still so much fun! My favorite moment here was floating and staring at these limestone cliffs and listening to the sound of nature. So peaceful! 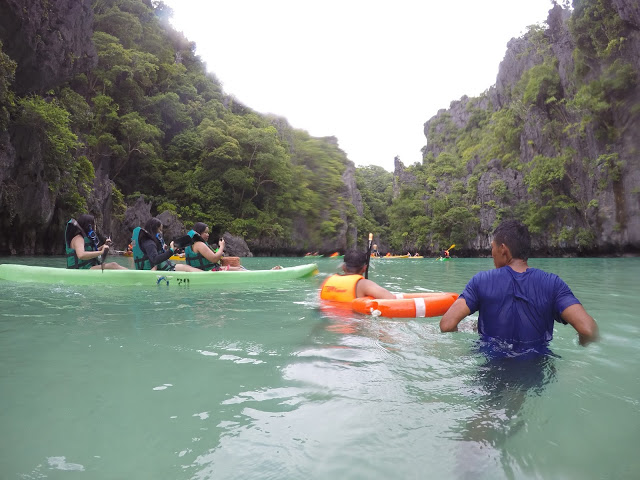 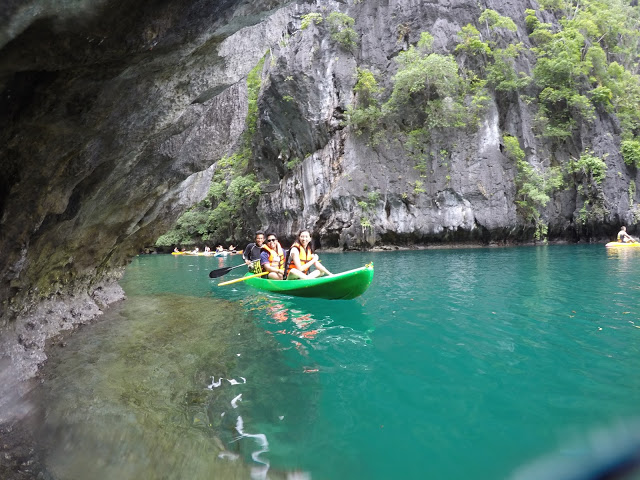 Located in Miniloc Island, our boatmen took us to this place for lunch. You will notice that most of the boatmen were preparing lunches on board while their guests are busy wandering out.
As I looked around, I couldn’t get over how the limestone rock formation almost touching the water creates a very scenic landscape. I would not mind eating lunch here every day! It was stunning! 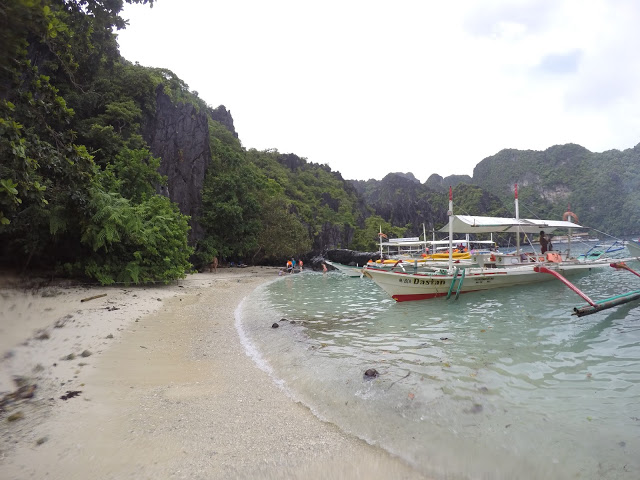 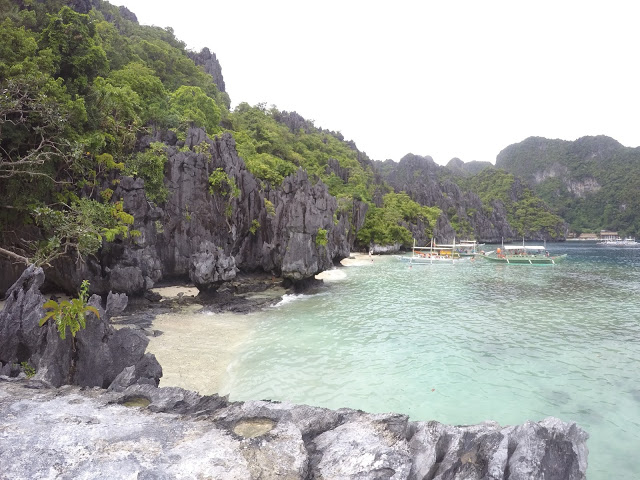 You then suddenly realize how lucky you are to be at a place like this! 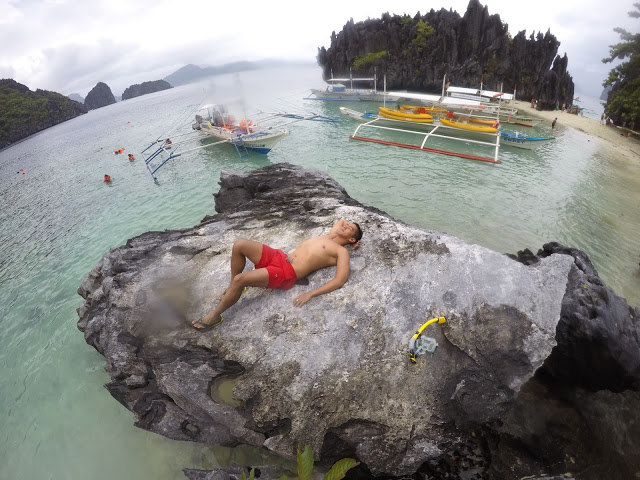 The lunch that was prepared for us was sumptuous! They prepared pork and fish dishes, rice, vegetable salads, and fruit. I should have brought some drinks with me! 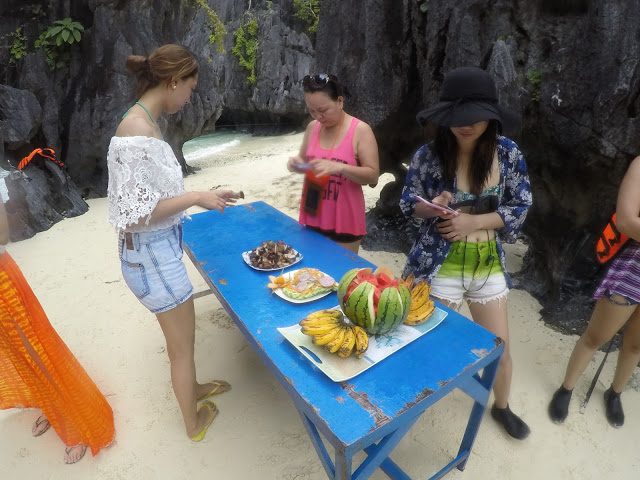 While others were having their siestas, I decided to do a quick snorkel. At first, it was a little murky, but as I swam further into the drop-off, there I was stunned! The variety of coral and fish is abundant in this area, and I am sure all around El Nido. 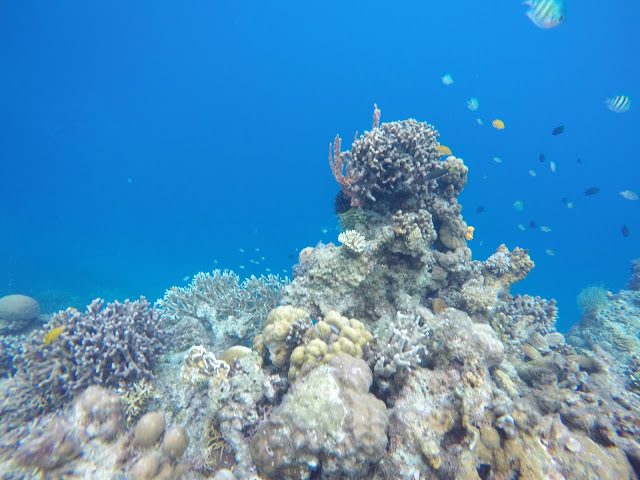 We didn’t waste too much time; after a few minutes of rest, we headed off to another place, and they call it Secret Lagoon. I was really curious about what this place would look like. The seas were getting rougher and rougher due to the storm, but we were lucky that it was low-tide. Why? Because that makes it possible to enter through that small tiny entrance to this lagoon. Just watch your head again as some rocks were quite sharp! 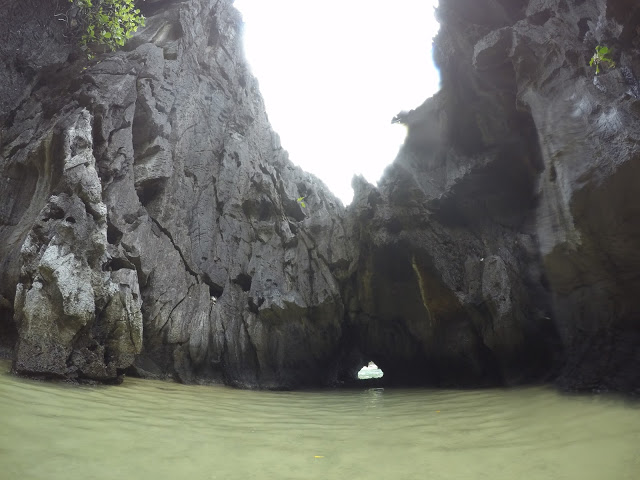 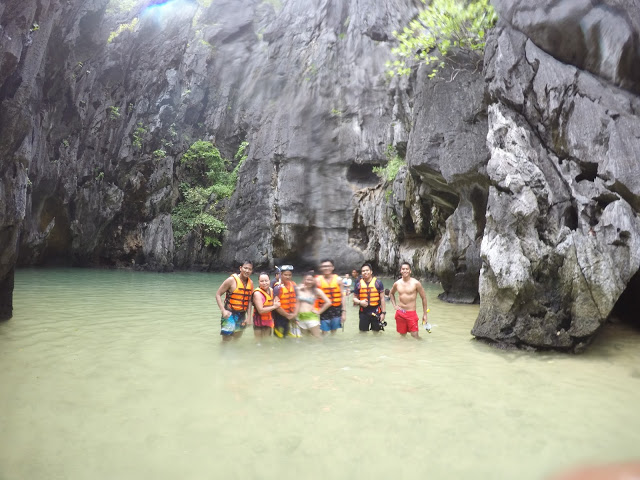 After exploring the secret lagoon, we walked to another beautiful beach next to it. 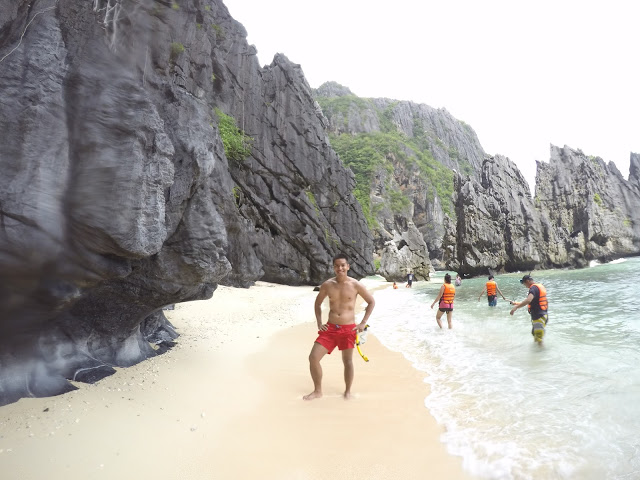 And when I saw this, I WAS BLOWN AWAY! This was one of the most beautiful coves I’ve seen in my entire life. It represents the grandeur of nature! 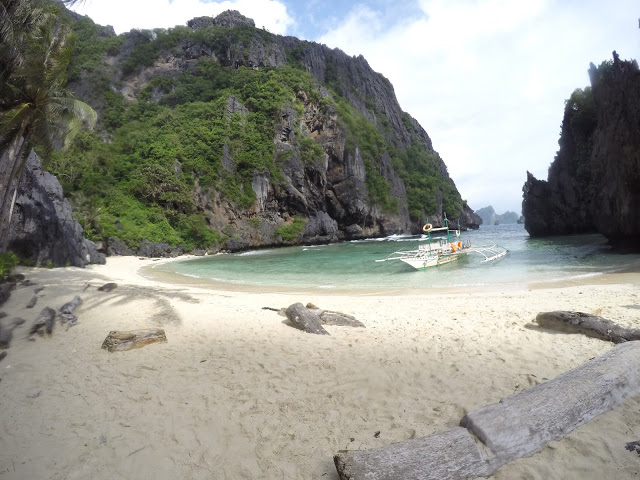 Apparently, this was also used as a backdrop in the Hollywood movie BOURNE LEGACY. And used as a location in numerous SURVIVOR series for other countries. If only given a chance to camp here and pretend to be in a survivor series, I would! 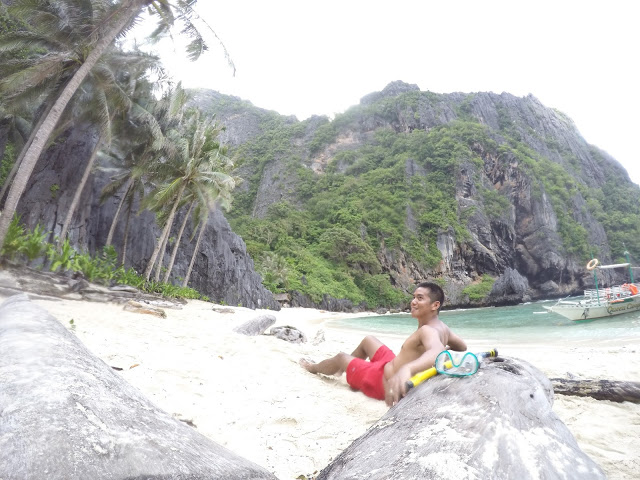 Another highlight of doing TOUR A was the trip to the Big Lagoon. We were fortunate that the tide was high enough for our boat to pass through this shallow passage for the last time. This Big Lagoon is always featured in many magazines and bulletin boards promoting El Nido and Palawan simply because of its pristine beauty and wonders.
As we pass through the limestone karst structures that appeared to be staring at us, the boat engine suddenly stopped, and it was complete silence. All of us in the boat were in awe of what we were actually seeing. It was beautiful! 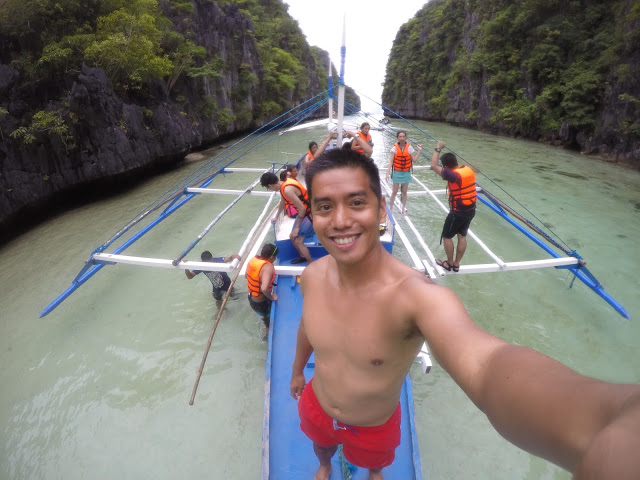 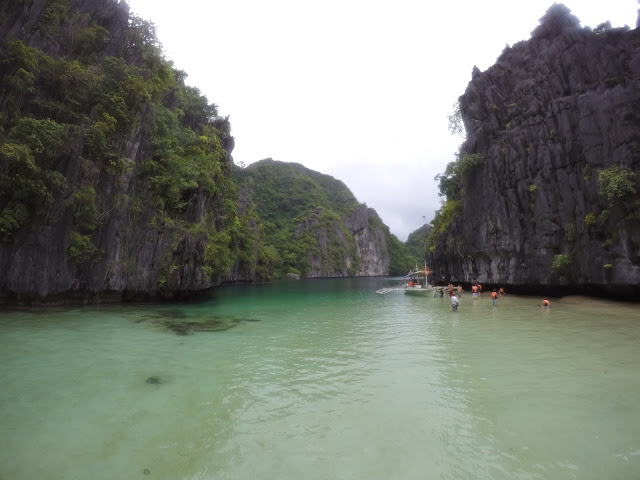 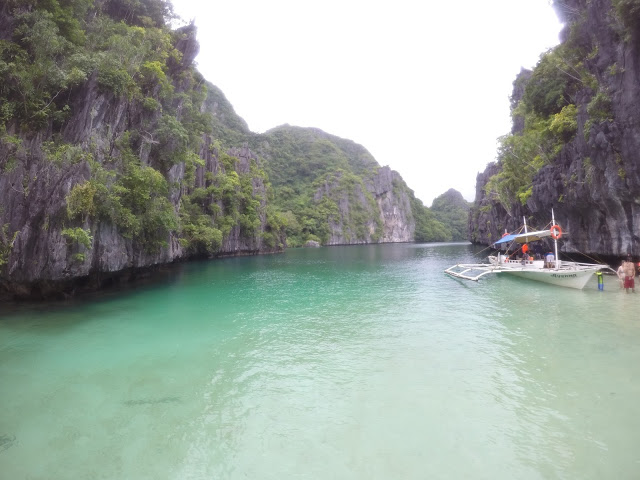 El Nido has so much to brag about, and it is not a surprise anymore why many foreign media think that El Nido is the place to find some of the world’s beautiful beaches.
With so many beautiful islands, limestone rock formations, and stunning white sand beaches around El Nido, you must definitely consider taking TOUR A first before trying out the other tour options. I see other travelers are doing the combination, but in a paradise-like El Nido, rushing is not an option! 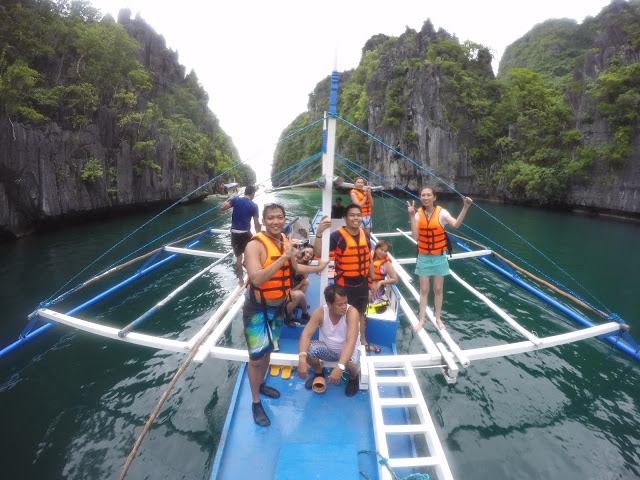 As we ended our tour, the rain suddenly poured hard, and all I could think of was how blessed we Filipinos are to have such a place like El Nido. I hope we continue to protect these natural wonders in our country for future generations to see! See you again, El Nido! 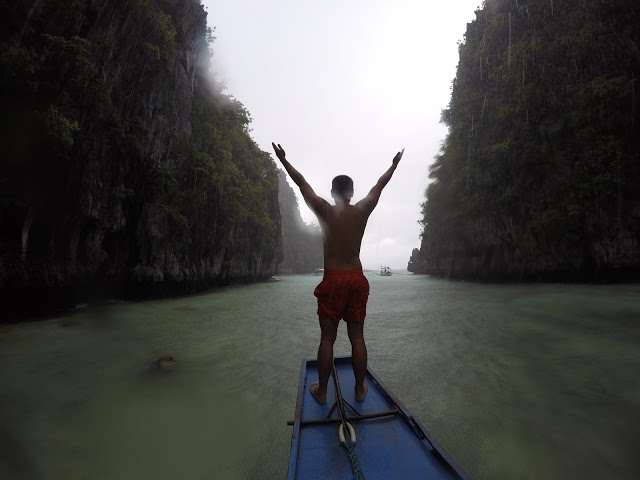 Check out this Video by Juicy Vlog about their experience in El Nido – The Tour A
TAGS: el nidoel nido island hoppingel nido palawanpalawan
Please follow and like us: